If you are traveling along route 123 in Carlisle, Ohio, make sure you stop and visit the Martian House. Yes, that’s right. The house has two silver colored flying saucers connected with metal duct. A house designed for an extra-terrestrial, but in reality are two Futuro houses that have been put together to make one residence for mankind. So, don’t go out to Carlisle, Ohio on an alien witch-hunt just yet. 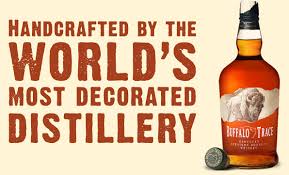 IMPORTANT: Always call the business before going to take the factory tour. We try and keep our data s up-to-date as possible but you should always check first.

In 1775 the Leestown settlement was established when brothers Hancock and
Courtesy Buffalo Trace Distillery Willis Lee established their camp with a small company of men. They struggled to survive in the unforgiving conditions of a fierce wilderness and by 1789 the area held a thriving population. The abundant limestone spring water and fertile bottom loam-found to be perfect for growing exceptional grain, gave way to distillation and the distinguished bourbon heritage took root. There has been a working distillery on the grounds since 1787. The first modern distillery was built on the site in 1857, the first U.S. distillery to incorporate the use of steam power. E. H. Taylor, Jr., one of Kentucky's original bourbon aristocrats, purchased the site. By 1886, the distillery had introduced the nation's first climate-controlled warehousing for aging whiskey and earned a world-wide reputation for producing America's finest bourbon. Albert Blanton took over the operation and in 1984 the distillery became the first to commercially market a single-barrel bourbon.

The distillery has a history of finely crafted, award-winning bourbons. In the last 10 years alone, Buffalo Trace bourbons have earned more than 40 top distinctions in national and international competitions, and is world renowned. Buffalo Trace Kentucky Straight Bourbon Whiskey is the distillery's namesake spirit. Made in celebration of the area's rich ancestral heritage, the bourbon embodies the bold and rugged soul of early America.

The Elmer T. Lee Clubhouse was constructed some 60 years ago, with 200-year-old logs from authentic Kentucky log cabins. The two-story building can accommodate groups from 30 to 250, a private bar area is available year round and the facility is equipped with a full kitchen. The rustic veranda and balcony overlook a tree-shaded courtyard and floral gardens. The grounds are complete with an ornamental stream and a quaint wooden bridge. The perfect setting for private parties, receptions, business meetings and conferences. Tours of the distillery include: a visit to the distillery museum, the viewing of a historic film, a walk through the century-old warehouse, touring the bottling facilities and a stop at the gift shop.
Hours
Monday through Friday 9 a.m. to 3 p.m. year-round.
Saturday 10 a.m. to 2 p.m. year-round. Tours start on the hour